Dariusz is a gentle soul, shy even, yet he is one of the most famous and recognisable activists in Poland. Dariusz became famous for dressing up as a priest during a 2019 Equality Parade and the photo of Dariusz at the head of the colourful procession was circulated across Poland causing widespread uproar. No stranger to controversy, in December 2018, Dariusz was also accused of painting a statue of Pope John Paul II to make it look like he was crying bloody tears. There were also placards, which read: “I covered-up for paedophiles”, “paedophilia is a crime” and “we believe the victims”. He was charged with three counts of vandalism, destruction of property and public desecration of a religious monument, punishable by up to five years in prison. The prosecutor was PiS (Law and Justice) party municipal councillor, Sebastian Kucharczyk, a fundamental Christian conservative.

It took the police two weeks to “work out” the case as the only tenuous link between Dariusz and the paint job was that he published photos of the monument on Facebook. Straight from a crime drama playbook, the activist was later arrested at his own home early in the morning to loud banging at his door followed by an unannounced raid and a full list of allegations.

“The detention itself, the house search and confiscation of electronic media to establish alleged accomplices was far too extreme. Similar measures haven’t been taken in other equally or more shocking cases,” Dariusz’s defence counsel, says.

The trial was held behind closed doors. Officially, because of violent threats made against him online. However, the activist’s attorney believes this was merely a pretext to stop Dariusz from speaking publicly about paedophilia amongst the clergy.

“We didn’t ask for the hearing to be kept secret, we wanted the presence of the media,” he said.

The case continues to drag on. In December 2020, the court sentenced Dariusz to 30 hours of community service a month and a ‘restriction of liberty’ order was issued for three months. The court waived the prison sentence on the charge of religious offences. In January 2021, the District Prosecutor’s Office appealed the sentence, as did Dariusz. When and what the final outcome will be remains to be seen.

I Am A Pariah, Brandished In My Own City

Dariusz has always been a well-known figure in his small town in the North of Poland, mainly because of his work on cultural events. He was well-liked and respected in the community. That is until 2018, when he became involved in organising local protests, including defending free courts (currently easily manipulated by political influence) and participating on the Committee for the Defence of Democracy. The activist ran for City Council for the Civic Coalition committee, which meant losing his anonymity.

”Although he knew that not everyone would agree with his political endeavours, he had not anticipated the scale of hatred: "It is not something that can be accurately predicted or simply 'included in the price' of activism. Even the toughest people have limits."

Dariusz became the target of attacks not only from nationalists, football fans and from within staunchly Catholic and homophobic circles, but also from political opponents. The local media merely fuelled the tirade, so he couldn’t count on their reliability or objectivity when it came to reporting on events.

In 2018, Dariusz lost his job, although officially not due to his activism. Suddenly, he found himself without a livelihood but he still had bills to pay. Losing his job came at the worst possible moment. Dariusz had a nervous breakdown, sinking into a deep depression, overwhelmed by harassment and broken by the lack of family support. Bożena, a Women’s Strike activist from Warsaw, came to his rescue. Thanks to the fundraiser she organised, Dariusz was able to move to another, much bigger city. This change may have saved his life. A larger city gave the activist the peace and anonymity he so desperately needed, as well as support from female and male activists working there. For the first time, he felt he wasn’t alone. Currently working with people with disabilities, he is still on a trial period:

”If you protest and don't hide your identity, sooner or later you will have problems at work. This is Poland."

"If You Support The Women's Strike, We Will Kill You". 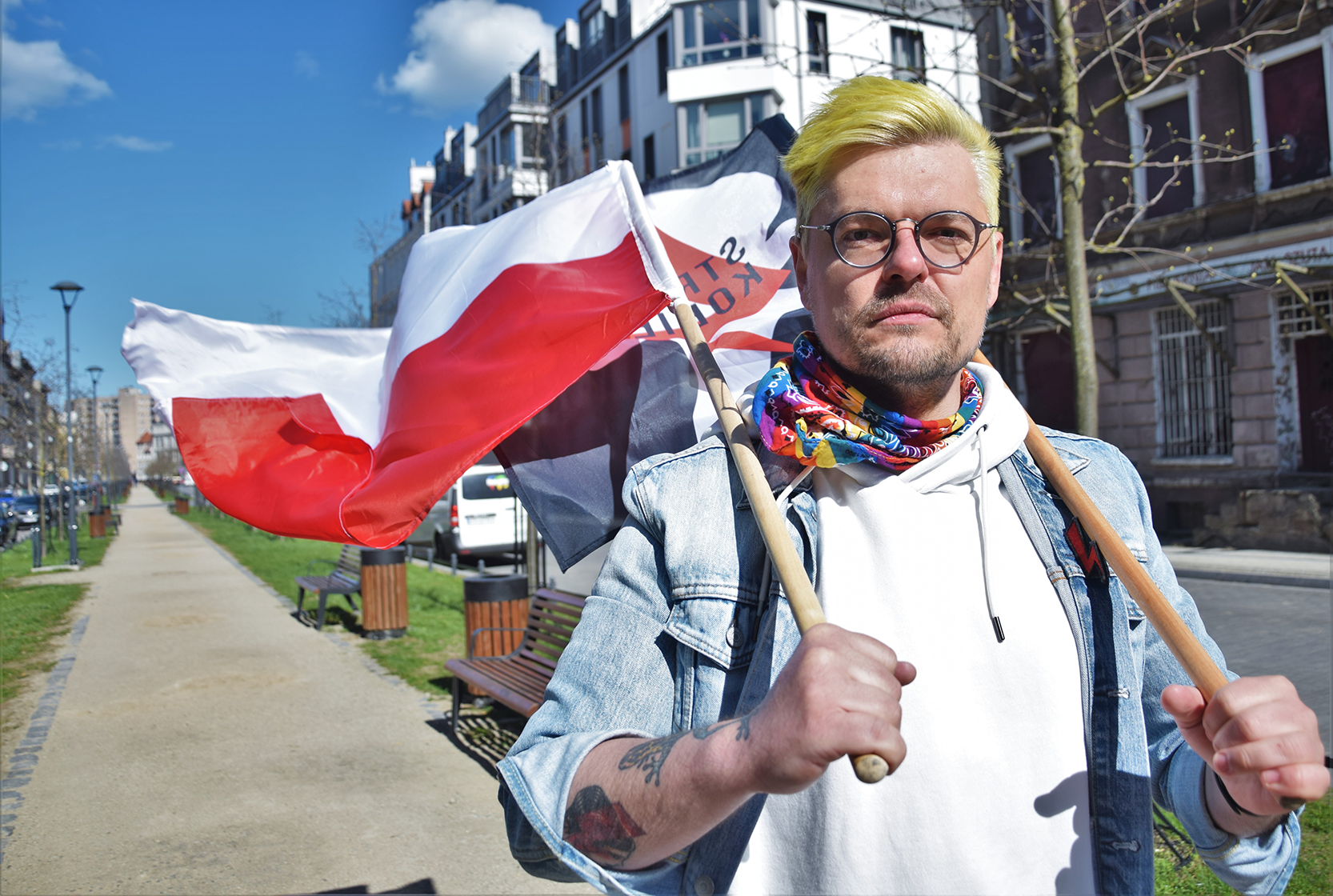 Dariusz is a board member of a LGBTQI+ organisation that received bomb threats for working with the Women’s Strike. As a bisexual person, he is actively involved in all anti-discrimination and LGBTQI+ campaigns. In February this year, the association received a threatening email for supporting the Women’s Strike. It was not the first for him but he approached the matter seriously. Although activists from the association were in touch with other organisations that had received e-mails, including bomb threats, they didn’t suspend their activities, nor did they dissociate themselves from the Women’s Strike.

Dariusz has been supporting the Women’s Strike since 2018. He co-organised local protests, travelled to demonstrations in Warsaw, and is in the network of local coordinators. On 22 October 2020, the highly politicized Constitutional Tribunal, dominated by right-wing judges rejected abortion on the grounds of foetal abnormality. This resulted in widespread protest. After attending one such protest with a friend in Warsaw, he stopped at a petrol station on the way home. Both Dariusz and his friend were attacked by a stranger who took a dislike to their Women’s Strike posters. Suffering from concussion, he reported the assault and the case is ongoing.

This was not the first time he has been assaulted for activism either. In his home town, he was brutally beaten by security guards after taking part in a protest in front of a shopping mall but the court ruled in their favour. Dariusz is one of those activists in Poland who knows first-hand how the pyramid of hatred works. He has experienced everything – social ostracism, alienation, taunts, verbal, symbolic, and economic violence, and eventually physical violence. But he survived.

“It could have been worse”, he says with stoic calmness.

After all, he’s right. He could have been killed.

The Family You Choose

Dariusz is divorced but has an 11-year-old child. As a rule, he doesn’t take his child to protests for safety reasons. In March, they attended an LGBTQI+ event, which promised to be family-oriented, colourful and progressive, at the same time as promoting healthy and active lifestyles. But the pair left when Dariusz noticed they were being watched. He didn’t want photos being published on the internet by the opposition. At the moment, he only has contact with his child on weekends and holidays, when they go to his home. Here, they are anonymous. However, the activist is under no illusion that sooner or later his “reputation” will catch up with them.

”There will come a time when my child will hear that they have a ‘faggot father’ and will face abuse about me."

So far, his child has been relatively unscathed by his activism. But they have already had a taste of how activism in any form can provoke reaction. During the wave of women’s rights protests after the controversial abortion ruling, his child added a lightning bolt overlay to their profile picture on Facebook. After receiving snide comments from a Religious Education teacher during an e-lesson, they removed it but were still taken aback by the reaction.

Dariusz has no support from his own family and there is little understanding for the motivations behind his activism. For challenging the archaic structures of Polish society, his parents wanted to send him to a psychiatric hospital.

Fortunately, Dariusz has forged strong connections with friends based on shared values and beliefs. The activist has been in therapy for several years to deal with post traumatic stress disorder. He doesn’t answer phone calls from unknown numbers, doesn’t read comments on the internet or access the “Other” folder on Facebook messenger. For about a year now, after reporting the matter to the police, he no longer receives threats by email or phone. He is calmer, but also much more cautious when dealing with new people. Despite what he has been through, he is not giving up. As he says, “he needs to protest, it is a way to unload accumulated emotions.”