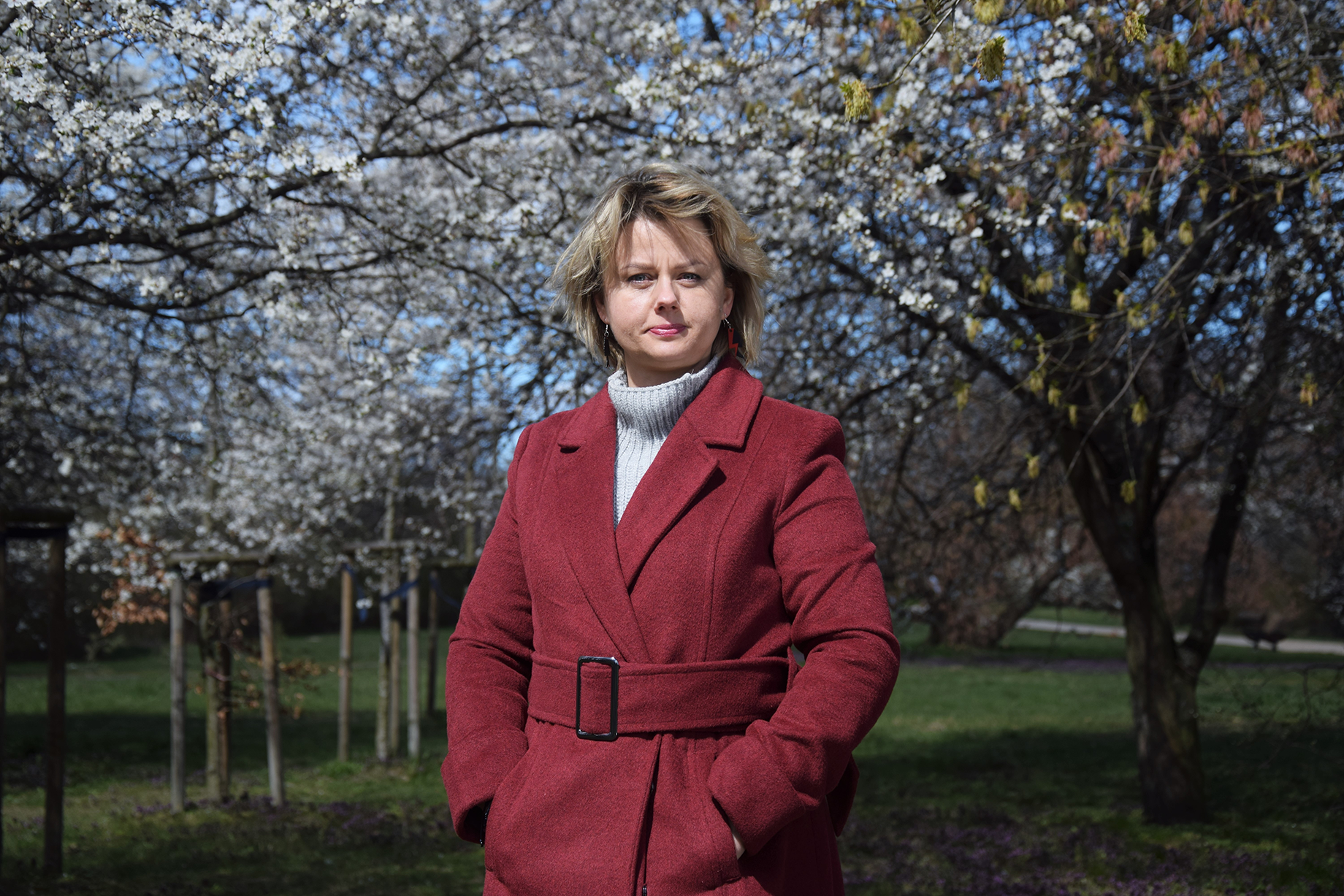 For Iwona, the last six months have been the toughest of her life – emotionally, physically and financially. Iwona has been actively involved in the Women’s Strike movement – the biggest women and social justice movement revolt since the 80s – in a small town with 60,279 inhabitants – ever since Poland’s Constitutional Tribunal, dominated by right-wing judges and backed by Julia Przyłębska who presides over the illegitimate Constitutional Tribunal, banned abortion on the grounds of foetal abnormality on 22 October 2020.

Since then, the teacher turned activist has organised six “Walk for Freedom and Women’s Rights” protests in her home city. The first of these was held on Sunday 25 October amassing around two thousand people.

”Three days later, after President Kaczynski's famous "address", where he urged Neo Nazis to defend the churches from “Bad feminist abortion b**ches from hell”, about 5,000 people came to "walk" with the activist, holding a banner: "Forgive the obstruction, Tczew has a government to overthrow".

After that, hundreds of people came regularly to the marches she organised. Overnight, Iwona had become the face and leader of the Women’s Strike in her town.

Someone Had To Light The First Match

As the headmistress of a non-public school, she was previously only known within the teaching community. Iwona had yet to catch on to the growing feminist movement in Poland kickstarted by the first All-Poland Women’s Strike (Ogólnopolski Strajk Kobiet, OSK) in 2016 against proposed legislation to tighten abortion laws. However, two years later she was protesting to defend courts free from political influence, the rights of teachers, and the rights of LGBTQI+ people. She travelled to Poland’s Tri-City area for Manifa, an annual demonstration organized around International Women’s Day on March 8 and across Poland for Gay Pride marches.

There have never been such large-scale demonstrations in Tczew before, especially anti-government ones. Iwona admits that she herself was surprised by the turnout and the response to the slogan: “I took part in the protests anonymously, without party symbols. First in a rainbow mask, then one bearing a lightning bolt. I didn’t want to appear party-affiliated. The demands were more important than the emblems. My data was later leaked by a Tczew paper, the local propaganda mouthpiece of the PiS (Law and Justice) Party.”

Tczew has a population of around 53,000. During one of the protests Iwona “brought” almost 10% of the community onto the streets, much to the annoyance of a prominent and unscrupulous Member of Parliament (MP) from PiS, who is also a dangerous Catholic fundamentalist, chauvinist and homophobe. The activist and her entire family were immediately affected by the street actions.

Soon after the first protests, Iwona’s husband lost his job at a state-owned company.

In response, on 15 November, over 300 people took to the streets of Tczew in solidarity. Although encouraging, it did little to change the situation. He became one of the “unemployables”. In turn, a government-run campaign was unleashed against her and continues. Disciplinary proceedings against her by the Board of Education are underway. In November, she was officially charged with incitement to animal abuse. An absurd move, which was orchestrated by the same fundamentalist PiS MP,  Kazimierz Smolinski. Over several months, the teacher has been summoned to successive “hearings” at the Department of Education. She is now at risk of losing her teaching licence. This is a textbook example of the regime’s repression of rebellious citizens.

”I am slated because I am the opposition, because I demolished the Catholic comfort zone in Tczew. The secular primary school we run has been a salt in the eye of the state-funded Catholic school system since its inception seven years ago. The two retired teachers who reported me to the Education board have close ties to the principal of a rival Catholic school."

The Women’s Strike activist is also under attack from the public: “I’ve received threats through messenger and by phone. Sometimes from haunted women stupefied by religion, but also from within right-wing circles, because I strongly defend the rights of women and minorities, mainly LGBTQI+.”

We Will Finish Them Off Financially 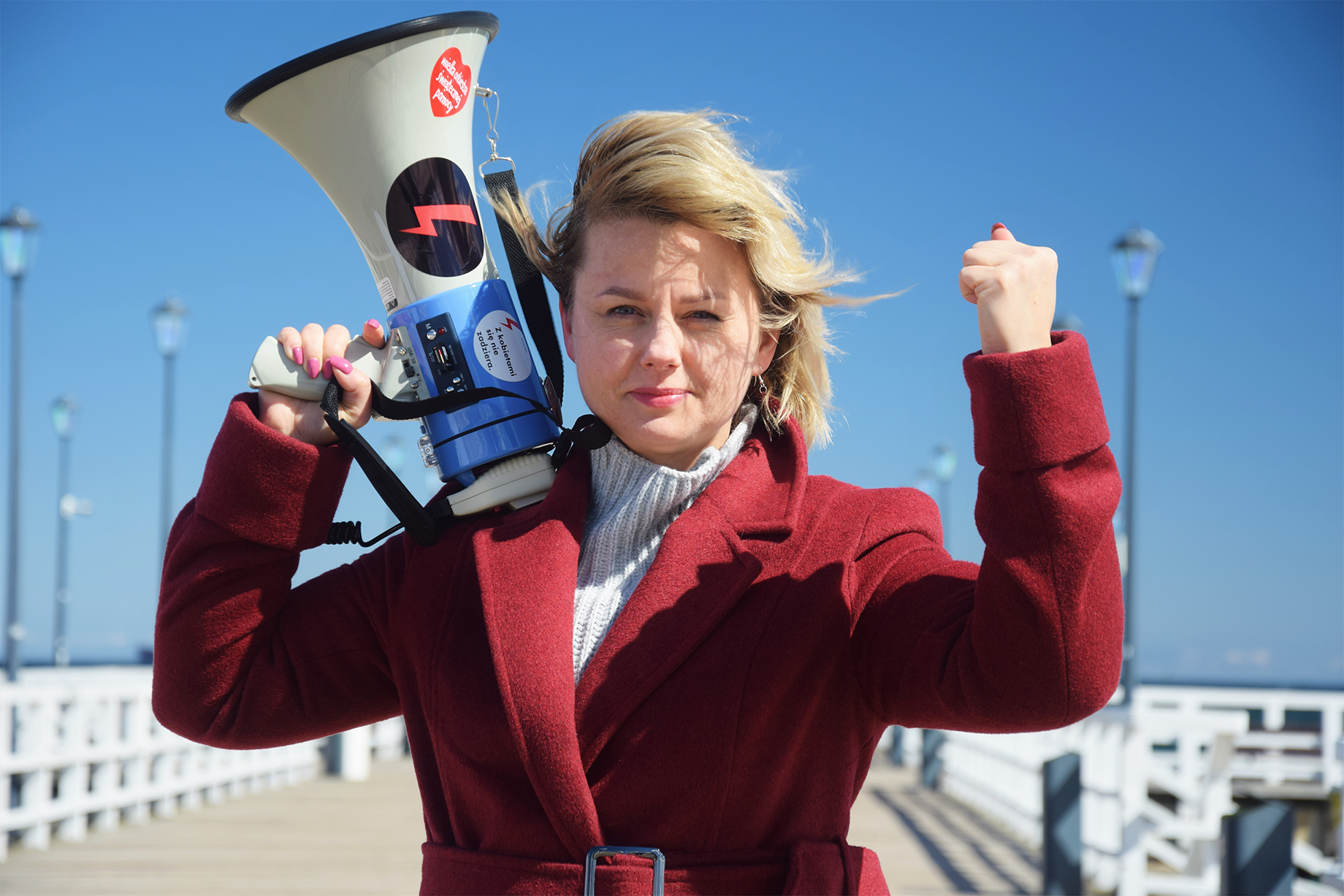 “My husband’s dismissal from his job has had a heavy financial toll. We have two children, one is studying and the other is a minor. My husband has been the main breadwinner for years, as the school we ran only brought in income in 2020.” At the end of last year, some parents pulled their children from the school because they disagreed with Iwona’s activism. From September, some of the children will continue at a rival Catholic institution. This has meant dissolving one class in Iwona’s school due to lack of pupils.

“It is painful. Especially as I am aware it was the female employees associated with the rival school who are responsible for my problems with the Board of Education,” Iwona says.

The lack of financial stability and the prolonged disciplinary procedure, the stress that accompanies her on a daily basis, carrying the responsibility for all the protesters in the city, has taken its toll on Iwona’s health. “I am strong mentally and I have the support of my loved ones, but I now have heart arrhythmia, frequent debilitating headaches, and major stomach and spinal issues. My doctor says it’s stress. This was not the case before.”

If Not For Family And Friends…

“My family admires and supports me. I surround myself with wonderful people who do nothing but help me. My husband is with me on the streets protesting alongside me, from beginning to end. I am supported by the girls from local women rights groups.”

The activists met in the autumn and formed a regional support network. Iwona received support from local LGBT+ community, pro bono lawyer groups and independent journalists. “I receive help from excellent lawyers from the Supreme Bar Association and journalists versed in my situation. I also count on the MPs and deputies of Spring.” What she cannot tolerate – lecturing, criticism and a lack of understanding – she doesn’t experience from “her own people”. Thanks to this she holds on, doesn’t break down or lose faith. She believes they will come out of this with the upper hand.

”I need reassurance all the time that I am not doing it alone. I need hope that what I am doing makes sense. As a family we have paid a high price for fighting for the right to express ourselves, for the right to freedom and self-determination. I know it is not over yet. It is this realisation that makes my stomach ache.

I am the target of influential members of PiS because I enjoy the respect of various circles, not only local ones. For many, I am credible and this is not to the liking of the PiS authorities, as well as the Catholic circles in our city.”

I Will Never Give Up

The activist is involved in more strike actions and events. She is not slowing down:

”I cannot remain indifferent when, in the majesty of the law, a women's hell is being prepared in Poland. I do this for my daughter, my niece, my students. So that they do not leave, so that they feel safe in their own country.

It pains me to see archaic doctrine spreading ever wider, engulfing more and more areas of our lives. The patriarchy is assuming absurd proportions, it is dangerous and heartless. Little by little, Catholic fundamentalists are eroding our freedoms, mocking reason, trampling on our rights, in partnership with a clergy devoid of basic decency. I know history well enough to know that religion was not and is not on the side of diversity, and that it should be separated from the state.”