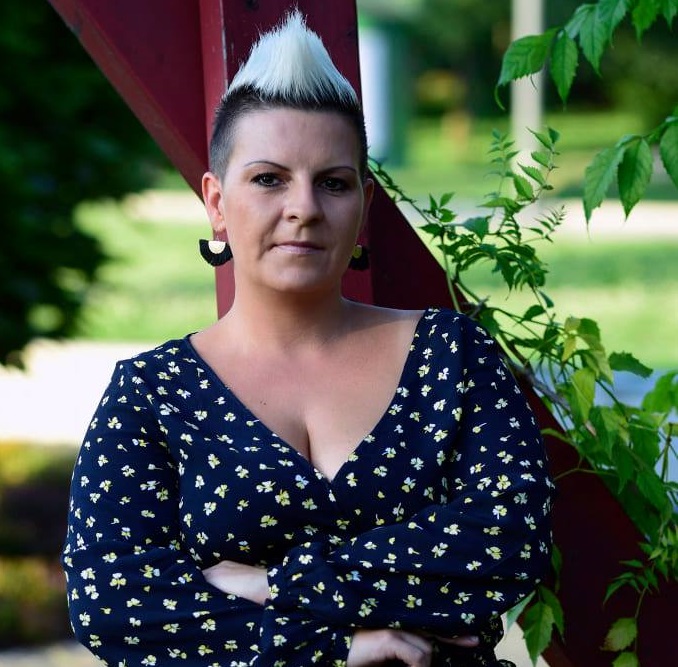 Hanka is undoubtedly one of the most distinctive and memorable strike activists; a true Silesian firecracker. She is the kind of person who could coax a cloud down to earth. Although she is only one metre fifty in a hat, Hanka seems at least three feet taller. Especially when she speaks. For such a petite person, she has an immensely deep and powerful voice. She is feisty too, with a hard, faraway gaze. Her hairstyle – a white mohawk and a shaved neck – serves as a warning; don’t mess with me. She is definitely the type of person you wouldn’t want to argue with but she commands respect in a natural and unforced way.

Hanka has been involved in the Polish Women’s Strike since the beginning in 2016. She is not the type of person who calmly hides her head in the sand in the face of injustice, suffering, and evil. She reacts. When she sees something that goes against her moral code, she turns her anger into action. She gets involved, invests time, work, energy, money. She could never remain indifferent.

She is hardworking, tireless, resolute, but gentle. Other activists call her, not only because she can arrange anything as she has a lot of contacts, but people also confide in her. There is the private side, known only to a smaller social circle – the loving, warm, caring Hanka. You can be a bit intimidated by her, but it is impossible to dislike her.

I Cannot Be A Passive Bystander

Since December 2020, she has been on the Strike’s Board of Directors and the movement’s strategic group. This is just one of her many roles. For years Hanka has been cooperating with a local Member of Parliament on preserving the Silesian dialect, specific only to the region of Silesia. At the end of May 2021, the activist became the Chairperson of the local Women’s Council, which she co-created and organised. Through this, she was involved in the fight against menstrual poverty and the “Pink Box” campaign, which saw feminine hygiene products delivered to 17 primary schools. Hanka has set her sights on opening a Women’s Rights centre over the next few months.

As with everything she does, she gives 110%. She has organised local protests and travelled to Warsaw responding to calls for action, attending rallies and work meetings. She uses her political know-how and experiences in local government and applies this to her activism. As a mother of a disabled child, she is particularly involved in advocacy for people with disabilities. She was the initiator of the Families of People with Disabilities protest calling on the government to increase state support for families of children with disabilities. The protesters camped inside and outside the Polish Parliament (Sejm) for forty days. Hanka was involved in this well before joining the Women’s Strike.

I Carry The Consequences On My Shoulders

At the moment she has a pending case against her, which has been dragging on since February 2020. A group of several dozen activists protested the arrival of Polish President Andrzej Duda during an election campaign, ‘welcoming’ him with banners, whistles, beating pots and drums, and Women’s Strike slogans, all while singing the national anthem. The activists were then attacked by supporters of PiS, the Polish ‘Law and Justice’ party currently in power. Yet, the police didn’t intervene. Hanka was detained after the protest, whilst at a café with friends. She was the only one charged. The activist’s attorneys have highlighted the gross negligence by the officers. For now, the police continue to fight, and the protesters aren’t letting up either.

”Despite this, Hanka emphasises the benefits of activism: "I've gained self-confidence, a sense of belonging and agency. I've come to believe that you can change a lot if you really put your mind to it."

For her, the most important thing about activism is that she meets lots of new people from different backgrounds, all with different stories. This enriches, develops and fascinates her. Hanka laughs when she reveals that conflicts have arisen: “It’s not like everyone in the activist community loves and supports each other and agrees on everything. Some people I have always been on good terms with fell out with me during the Strike. We argued, a few people got offended and left activism.  So, those of us who get along, despite our differences, are the ones left standing. We are tenacious. We know we’re doing things for a cause, not for our own ambition.”

Balance Of Gains And Losses

The activist says the biggest downside is definitely the loss of anonymity: “I have become a public figure whose actions are under close scrutiny. My private life is under a magnifying glass.” And not everyone likes what they see.

”I come from a small town where I initiated the protests so I am easily recognisable. Even after the first protests, a wave of abuse hit me. I was called disgusting, offensive names. I was threatened with death. I was called Hitler's daughter. I received messages like : We know where you live. We know what your family members look like," says the activist.

Hanka’s lawyer intervened on the criminal threats she was receiving.

”It was really scary. After every strike action in the city, or even nationwide, a cesspool of vitriol is poured on me by the local media. The haters attack me by name and surname. I read that I am a leftist whore, a witch, a murderer, a Ukrainian bandit. Every now and then new insults are added. It's hard to get it all out of my head,” she says.

Activists who are just starting out often delude themselves into thinking that what happens at a protest stays at a protest. They do what everyone does at demonstrations – they shout, set off flares, chant, use explicit, often vulgar language, and have a role to play in pulling the crowd along. They think that upon returning home they can just return to their “ordinary”, everyday life. Hanka has long since learned that this is not the case. She knows all too well that poking an anthill with a stick is never without consequences.

The public reaction to her participation in the Strike movement catches up with her even in her own bed, when she fires up her laptop before going to sleep, she receives abuse.

“I received messages from a stranger claiming to be the devil telling me he had sent an angel of death after me,” the activist says.

Hanka’s home is her fortress but her address is no longer a secret. In order to have some semblance of privacy and shield herself from prying eyes, as well as for the safety of her disabled son, the activist and her family attached a densely woven reed mat to the fence but this was destroyed several times by unknown perpetrators. As were her Christmas decorations. Twice, firecrackers were thrown into her yard, which terrified her children. Hanka’s friends warned her that opposition supporters were hunting her down and asked her to stop her activities because of the danger she was in.

The Costs Are Borne By Those Who Are Closest 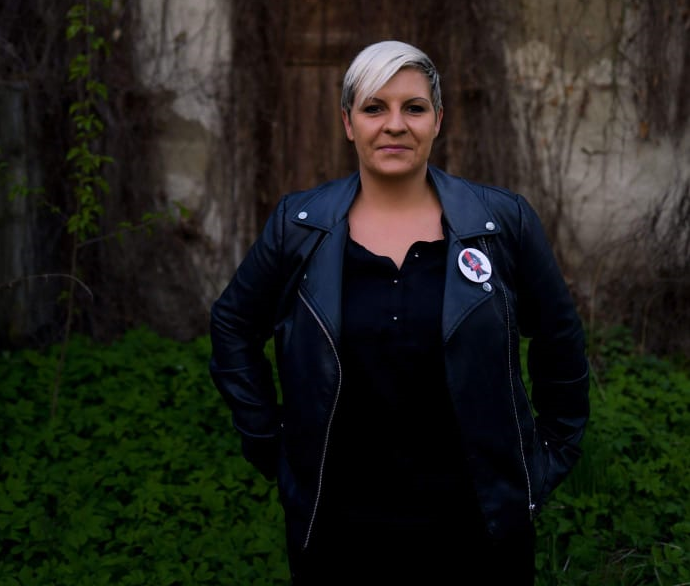 Soon after Hanka’s story began making headlines in the local media, her family also began to feel the effects of Strike activism.

“People from my hometown were harassing my grandmother, telling her that I was the antichrist, that I was cursed and cast out of the community,” she says.

Some members of Hanka’s family disagree with what she is doing and have turned their backs on her. Her parents support her but Hanka admits that it hasn’t been easy for them. They love their daughter, and know she’s doing what she believes is right, but the scale of abuse scares them. They hear and read that they ‘raised a lesbian’ – the word ushered as an insult, alongside ‘child murderer’. They have faced a barrage of insults by friends and strangers alike who disapprove of what Hanka is doing.

What hurts Hanka most is that activism has meant falling out with her brother. His views lie at the other end of the spectrum. He supports neo-fascist organisations and the radical right. Hanka can’t forgive him for this, and her brother despises what she does and what she represents. Hanka knows she can’t keep quiet but doesn’t want to be divisive or fight in front of her parents. So, for a long time, the activist hasn’t participated in family celebrations, even though holidays are customarily celebrated together.

Hanka, like most Strike activists, raised funds for protests and sourced sponsorship, but she also financed much of it herself.  With time, she began using the reimbursements set up from the ‘Strike fund’. Although, the money isn’t the most important thing to her. Hanka’s previous relationship fell apart because of her involvement in the Women’s Strike. Activism requires time, dedication, energy, and attention. You are often away from home and not all partners accept that. Nor can they deal with the loss of anonymity and abuse.

Hanka will bear the health costs of activism for the rest of her life. In May 2018, the activist took part in a counter-protest aimed at blocking a fascist march. The counter-protesters sat on the ground so the march couldn’t move ahead but were forcibly removed by the police. The counter-protesters were locked up and attacked. The mayor disbanded the gathering for security reasons. The fascists were aggressive, but it was the police who broke Hanka’s friend’s arm. It was a policeman who hit Hanka over the head whilst she was helping a fellow protester off the ground. Several people complained about police brutality but the police force swept the matter under the rug. The officers faced no repercussions. Yet, the activists were later tried for disrupting a legal demonstration. Fortunately, they were acquitted. Hanka now has permanent hearing loss in her left ear, problems with her spine, insomnia, and Post-Traumatic Stress symptoms. She also has a severe mistrust of the police. Yet, she refuses to give up: “I have a small circle of friends and support from other female activists. My mother, my partner, and my children support me. They don’t criticise, they don’t judge, they don’t hold grudges, instead they respect me for what I do, they motivate me.

”I can't and don't want to let go. There is still so much to do, if not us, then who will do it? I want my children and future generations to live in a better world, without fear and anxiety about each day. The strike is a part of me."